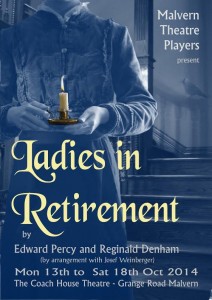 by Reginald Denham and Edward Percy

Set in the 1880’s and based on an actual murder, the play has been described as one of the best

thrillers written for the stage.

Leonora Fiske, a retired ‘actress’ lives with her companion Ellen Creed. A visit from Ellen’s eccentric

sisters tests Leonora’s patience and she asks them to leave, but it is Leonora who subsequently

vanishes. Nephew Albert, with his shadowy past, arrives seeking a refuge thereby adding to the

complexity. Slowly, however he begins to unravel the mystery of the disappearance, and creates a

“a kind of thriller, Agatha Christie might have written, Curtain Up

if she wanted to frighten rather than tease her readers”

“And let those that play your clowns say no more than is set down” – advice that Will Kemp may have done well to follow!…
View Calendar
Add