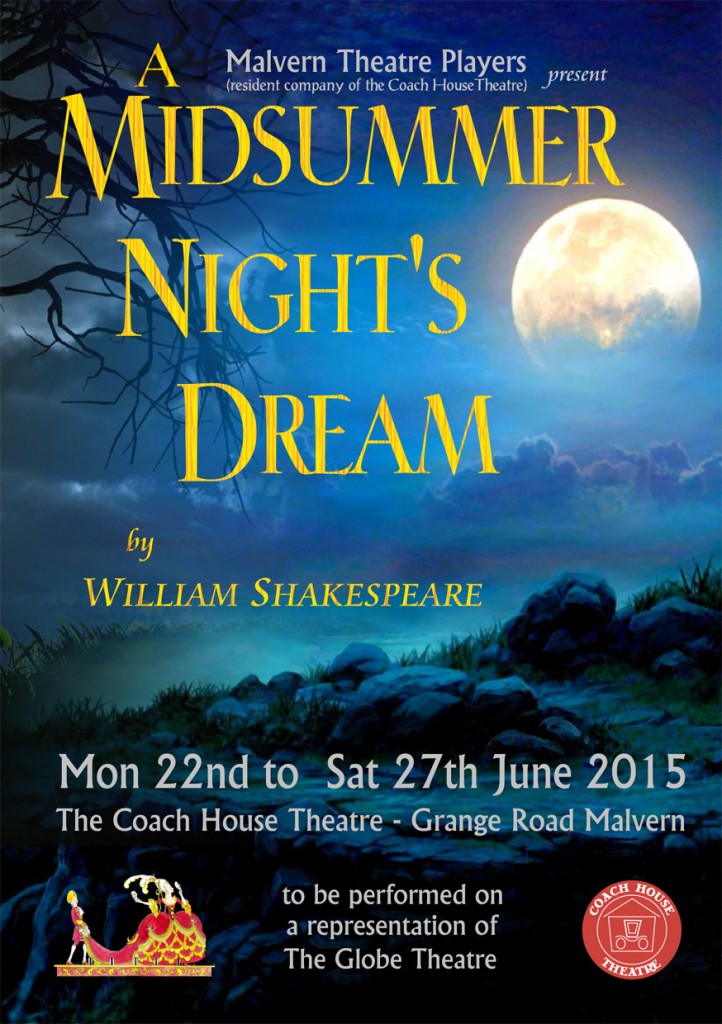 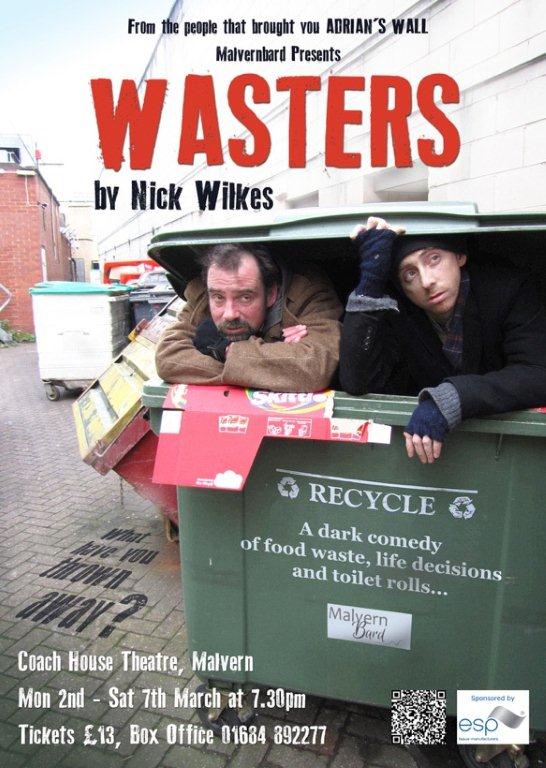 From the people that brought you ‘Adrian’s Wall’ Malvernbard presents… WASTERS A dark comedy by Nick Wilkes Peter lives in an alley at the back of the supermarket, has done for years. He knows that at six o’clock everyday the food comes, food that is past it’s sell-by date which the supermarket throws out. Mostly warm and mostly dry, his existence is one of cardboard, coffee and chatting to his friend the bin. He is King of his road… And then David arrives… Malvernbard presents a dark comedy of food waste, life decisions, and toilet rolls… http://www.malvern-theatres.co.uk/events/event/wasters/ Coach House Theatre,[…]

by alastair on 27 February, 2015 END_OF_DOCUMENT_TOKEN_TO_BE_REPLACED

Matt’s 2014 album, Wildest Dreams, was launched at a party at the Coach House Theatre in his home town Malvern on November 1st. A sell-out the event was an amazing success with the audience clamouring to be first to buy the CD which was on pre-sale at the gig. Take a look at the video which covers the events of the evening which started with a video of a European Tour Road Trip filmed by Matt and his then fiancée, now wife, Lisa. The video was followed by Matt ably assisted by long time music partner ‘Big’ Dave Small. Enjoy![…]

by alastair on 11 November, 2014 END_OF_DOCUMENT_TOKEN_TO_BE_REPLACED 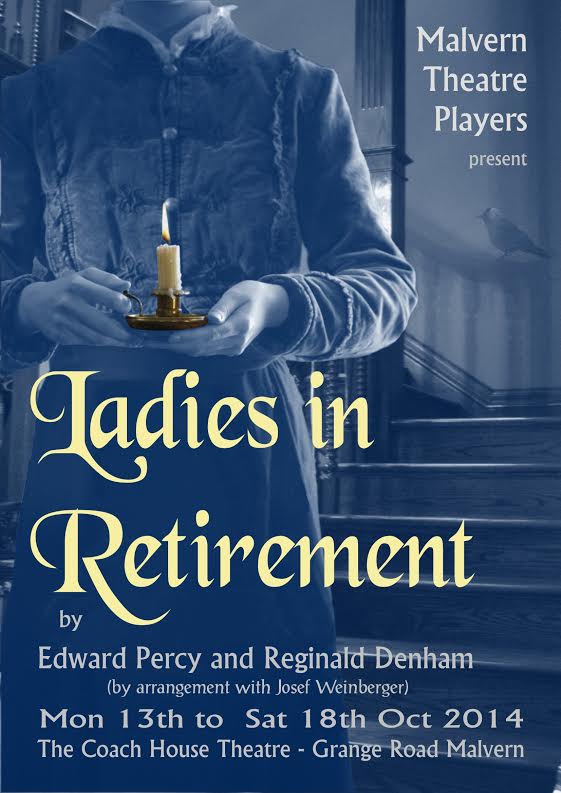 Ladies in Retirement by Reginald Denham and Edward Percy Set in the 1880’s and based on an actual murder, the play has been described as one of the best thrillers written for the stage. An atmosphere of mystery is evoked in a lonely house on the marshes of the Thames estuary where Leonora Fiske, a retired ‘actress’ lives with her companion Ellen Creed. A visit from Ellen’s eccentric sisters tests Leonora’s patience and she asks them to leave, but it is Leonora who subsequently vanishes. Nephew Albert, with his shadowy past, arrives seeking a refuge thereby adding to the complexity.[…]

by alastair on 9 August, 2014 END_OF_DOCUMENT_TOKEN_TO_BE_REPLACED

Malvern Theatre Players (resident amateur company of Malvern Theatres) 37th Season        The Accrington Pals by Peter Whelan   On the eve of the First World War the young men of Accrington hear General Kitchener’s call for a New Army and become the smallest town in England to raise a Pals Volunteer Brigade. When they arrive in France, the brutal reality of the trenches is beyond anything that they were prepared for. And back home amongst the women they leave behind – mothers, wives, daughters, lovers – nothing can ever seem the same again. Based on a true story, this[…]

by alastair on 14 April, 2014 END_OF_DOCUMENT_TOKEN_TO_BE_REPLACED

Trailer : https://vimeo.com/84575296  Running time: approx. 70 mins, no interval Contains some swearing, and is therefore suitable for 18+ audience   A Stranger, a Savior, a Sacrifice. A tabletop football game in a café at a dreary seaside town out of season would seem to be an unlikely place to address one of the most important global problems of our time. Whether you worship God, football or the latest X Factor celebrity, one question is clear… is religion killing faith? Does ritual rule?

MALVERN THEATRE PLAYERS (Resident Company of the Coach House Theatre) 44th Season   THE RISE AND FALL OF LITTLE VOICE  By Jim Cartwright  Little Voice has a hidden talent. Alone in her room with only her dead father’s record collection for company, she sings along with the greatest divas of the 20th century with a voice that is pure gold. Downstairs, her hard drinking mother Mari is on the rampage – she’s after booze and a working phone line. When her latest squeeze Ray overhears LV’s secret talent, he realises that she may be his ticket to the big time. But LV[...]
Nov
21
Sat
2020
7:30 pm KEMP’S JIG @ The Coach House Theatre
KEMP’S JIG @ The Coach House Theatre
Nov 21 @ 7:30 pm – 10:00 pm

“And let those that play your clowns say no more than is set down” – advice that Will Kemp may have done well to follow! In 1600 Will Kemp, the most famous comic and clown of his generation and Will Shakespeare, most famous playwright in history, fell out in an argument over a play. Shakespeare stayed in London, writing for The Lord Chamberlain’s Men and producing the plays still renowned the world over. Kemp embarked on a bizarre PR stunt, Morris dancing from London to Norwich. Based on Kemp’s own diary, “The Nine Daies Wonder”, Kemp’s Jig is a romp through Elizabethan[...]
Dec
15
Tue
2020
7:00 pm THE WIND IN THE WILLOWS @ The Coach House Theatre
THE WIND IN THE WILLOWS @ The Coach House Theatre
Dec 15 2020 @ 7:00 pm – Jan 2 2021 @ 7:00 pm

Malvern Theatre Players (Resident Company of the Coach House Theatre) 43rd Season THE WIND IN THE WILLOWS  adapted by Amelia Marriette from the book by Kenneth Grahame  The enchanting tale of river-folk is faithfully retold in Amelia Marriette’s adaptation of Kenneth Grahame’s much – loved story. The combination of nostalgia for the warmth and security of times gone by and the simple humour combined with lots of audience participation will be a certain hit. Mr Toad is in his element in this production, defending his rights as a car stealing, horn – tooting, tyre – burning speed freak. His friends, Ratty, Mole,[...]
Dec
19
Sat
2020
5:00 pm AMELIA MARRIETTE – BOOK LAUNCH @ The Coach House Theatre
AMELIA MARRIETTE – BOOK LAUNCH @ The Coach House Theatre
Dec 19 @ 5:00 pm

Book Signing and Reading with Author Amelia Marriette  Amelia Marriett grew up in Malvern and has had a long relationship with Malvern Theatre Players; they have performed all of her original dramatic pieces and adaptions.  Her version of Wind in the Willows is currently in the repertoire. Amelia relocated to Austria in 2015.  Her new book, Walking into Alchemy, traces her life from Malvern to Devon and to her new home in Bad Sankt Leonhard.  It also tells the story of a 13-mile walk that she completed 52 times in 52 weeks in the hills and mountains of Southern Austria. “This[...]